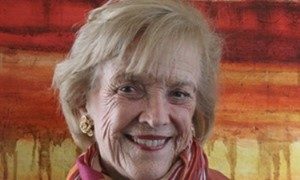 Adele Hall (1931-2013) believed in a world in which children would be healthy and well educated, families would have decent livelihoods, and all people, regardless of status, race, gender, or religion, would have decent opportunities to pursue the comforts of successes in life. Narrowing the gap between that vision and reality was the mission to which Adele devoted her career. After being named the first female president of the Heart of America United Way in Kansas City, she went on to found the Women’s Public Service Network to provide a forum for women in Kansas City to focus on social issues.

Her commitment to creating lasting community impact was evident in her other leadership roles, including those for the University of Kansas School of Nursing Advisory Board, Junior Achievement, Negro College Fund, the Youth Volunteer Corps of America, the Library of Congress Trust Fund, and Kansas City’s Nelson-Atkins Museum of Art.

“The Junior League is a wonderful opportunity for brilliant women to network – to find that this person has a strength that this other person does not have, but together the sum of the parts is much more than the whole would be without them.”  – Adele Hall, 2012